As I sat with a client going over their web traffic figures to provide advice on conversion optimisation, I almost couldn’t believe what I was seeing.

“Your traffic dropped to almost half in January! What happened to all that traffic?,” I asked Ryan, the Ecommerce Product manager for a fast-growing online retailer.

Ryan sighed. “Well we made a large investment into new paid traffic to increase our sales.

“But the new paid traffic we invested in wasn’t profitable. Revenue increased by several million dollars, but the cost of acquisition was way too high – so we had to cut our traffic spend back to original levels.

“It was pretty bad. We even had to lay off a few staff,” he said.

After eight months investing into paid traffic, Ryan’s company traffic was slashed by 200,000 sessions per month – TO ALMOST HALF.

So what went wrong?

“We thought our website conversion rate would automatically increase because we’d improved our ads. We even ran AB tests in-house every month to improve the conversion rate,” Ryan said.

“But the conversion rate hardly went up. So we decided to cut costs, and put our focus back on the website and improve the shopping funnel.”

It was bizarre to me how after months of AB testing the conversion rate hadn’t improved – what was Ryan’s internal AB testing and CRO process like?

Ryan proceeded to describe how every two weeks he and his team would “get together and pick” which part of the shopping funnel they would try to improve.

For example, Ryan’s team would “pick” the product-to-shopping cart flow.

Ah, now it was getting clearer. That was their first mistake.

Randomly picking a section of the funnel to improve won’t cut it.

This selection should be based on data and evidence, specifically targeting areas that indicate the biggest drop-offs.

Next they would brainstorm together and come up with a hypothesis on possible changes they could AB test on the product page.

Deciding what to test based on opinions only is a big gamble. 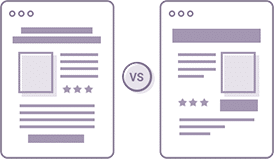 Although some analytics data was reviewed, the changes they AB tested were mostly decided based on team opinions, rather than a structured approach supported by conversion research and data analysis.

Ryan was blown away when I showed him how Conversionry’s clients are resulting in 2 out of 3 AB tests winning. At a test win rate of nearly 70 per cent – our team is creating a higher, consistent industry standard we are really proud of.

For Ryan and his team, this was their missing link.

Ryan immediately took this advice and applied it to their CRO process and team, creating targeted AB tests from data-backed hypotheses, substantially improving the ROI of their digital marketing efforts and increasing their conversion rate. Win!

What we can learn from Ryan’s story:

Do you think Ryan made the best decision in slashing traffic? What would you have done in Ryan’s position?

Want an experienced eye looking at your existing conversion performance? Take advantage of our complimentary Conversion Audit that got Ryan winning.

*Note: Names in this article have been changed for privacy.

Raoul Doraiswamy is the founder & managing director of Conversionry, a leading Melbourne-based conversion optimisation agency, that accelerate conversion rates and revenue for global ecommerce and omni-channel retailers via data-driven optimisation and experimentation programs. His passion is to empower Ecommerce marketing teams to win by leveraging customer behaviour. Raoul loves all things conversion, data and persuasive psychology. On his off days, he loves exploring the outdoors with his wife, discussing leadership and helping young people reach for their greatest potential.

Beat your competition to it!

Get the latest actionable conversion strategies delivered straight to your inbox!

Beat your competition to it!

Get the latest actionable conversion strategies delivered straight to your inbox!